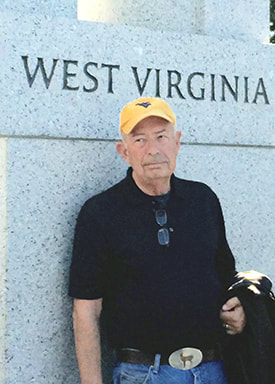 Stephen Coonts is the author of innumerable New York Times bestsellers, the first of which was the classic flying tale, Flight of the Intruder.
Born in 1946, Stephen Paul Coonts grew up in Buckhannon, West Virginia, a coal-mining town of 6,000 population on the western slope of the Appalachian mountains. He majored in political science at West Virginia University, graduating in 1968 with an A.B. degree. Upon graduation he was commissioned an Ensign in the U.S. Navy and began flight training in Pensacola, Florida.

He received his Navy wings in August, 1969. After completion of fleet replacement training in the A-6 Intruder aircraft, Mr. Coonts reported to Attack Squadron 196 at NAS Whidbey Island, Washington. He made two combat cruises aboard USS Enterprise during the final years of the Vietnam War as a member of this squadron. After the war he served as a flight instructor on A-6 aircraft for two years, then did a tour as an assistant catapult and arresting gear officer aboard USS Nimitz. He left active duty in 1977 and moved to Colorado. After short stints as a taxi driver and police officer, he entered the University of Colorado School of Law in the fall of 1977.

Mr. Coonts received his law degree in December, 1979, and moved to West Virginia to practice. He returned to Colorado in 1981 as a staff attorney specializing in oil and gas law for a large independent oil company.

His first novel, Flight of the Intruder, published in September 1986 by the Naval Institute Press, spent 28 weeks on the New York Times bestseller lists in hardcover. A motion picture based on this novel, with the same title, was released nationwide in January 1991.

The success of his first novel allowed Mr. Coonts to devote himself full time to writing; he has been at it ever since. He still enjoys flying and tries to do as much of it as possible.